Rose Rosette – Maybe a ‘Knockout’ for the Rose Lover

Find this article at:
go.ncsu.edu/readext?459506
— Written By Shannon Newton

In the 1940’s Rose Rosette Disease (RRD for short) was first seen in Wyoming on multiflora rose. Multiflora rose is common throughout the country and is considered an invasive weed in North Carolina. While RRD took many years to travel across America, in the last ten years or so it is now found all along the east coast. RRD has spread to infect landscape roses, including the two most disease and insect resistant roses, the Knockout and Drift. In 2007, the Brooklyn Botanical Garden had to remove many of its roses due to RRD, and in 2012 the Raleigh Rose Garden discovered RRD among its roses and in a traffic circle on Hillsborough Street. It can now be found here locally.

Once your rose is infected with RRD, it only takes from 7 days to 9 months for your plant to begin to show signs of RRD. Some of the common symptoms are listed, but be sure that it’s RRD. (Sometimes you can use glyphosate near the plant and it may have some of the same symptoms if accidentally sprayed or the chemical spray blows on the plant.)

Excessive thorniness. Rose canes may have a profusion of thorns that may or may not be hard.

Soft canes. Rose canes may not be stiff but instead can be bent nearly in two without breaking.

Red, strappy leaves. Leaves may be thin and strap-like and never expand to resemble a regular leaf. These leaves may also be red. (New leaves of rose bushes are normally red but will eventually mature to green.) 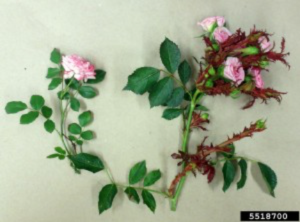 Witches’ broom. A witches’ broom is a bunch of growth in one area of the plant. Several buds will form in a short section of a stem, resulting in what looks like a broom.

What to do if you suspect your rose has RRD

RRD is a fatal disease carried by the microscopic eriophyid mite and is a systemic virus. Remember the mites are so small they can be spread by wind. If they are on one rose bush, they can be blown or even crawl to another nearby rose. You can help minimize the spread of this disease, by promptly removing the diseased plant and destroying it.

This means you CANNOT TRIM OUT THE DISEASED parts of the rose. Once identified remove and bag the rose plant, roots and any leaves on the ground, immediately, if not sooner! Be sure to dispose of in your regular trash. Do not put with other grass clippings or limbs for pickup. If your county allows burning, this is another way to eliminate the virus. Do not put the diseased plant and its parts in your compost pile.

Be sure to sterilize your tools and gloves after removing the diseased rose. You can use a household disinfectant such as Lysol or bleach. This is another step to help reduce the spread of RRD.

Because RRD is systemic through the entire plant and root system, do not plant another rose in the same place for two (2) years. The root pieces can still harbor RRD and infect your new rose.

Monitor your healthy roses for any signs of RRD. Make sure your roses are spaced far enough apart so there is no touching of leaves, stems or flowers. If the plants are touching, move them further apart.

Roses are America’s favorite flower. The major growers of roses are well aware of RRD and its spread across our country. They have committed millions of dollars in research to develop resistant varieties. In the meantime, native Rosa setigera and Rosa Carolina are resistant species that you can plant.

You can help reduce the spread of Rose Rosette disease by monitoring your rose garden or roses in the landscape. Prompt removal, correct disposal and sanitation of tools and glovers are key to minimizing the impact of this devastating disease.