Find this article at:
go.ncsu.edu/readext?895326
— Written By Robby Brockman

One of the most common and valuable trees you see around farmsteads and homes is the pecan tree. Pecan trees have long been planted both in the home landscape and in huge orchards for their delicious and nutritious nuts. 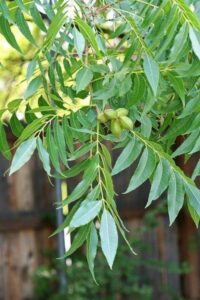 Photo by Andrey Zharkikh CC BY 2.0

Pecan trees are a species of hickory that have been bred for hundreds of years to have more meat inside the nut. The Native Americans were the first to harvest pecans and it is believed that they cultivated pecans as well. The native range of pecans includes the river floodplains of southeastern and south-central North America. The pecan tree itself is a very large and arching tree that often reaches heights of 100 to 140 feet.

It was once common to plant a few pecan trees around your house for shade in the summer and nuts to harvest for home use in the fall. Unfortunately, pecan tree wood is brittle and often breaks in the large storms and hurricanes that pass through North Carolina. Because of this, it’s generally a good idea to plant pecan trees further from the house so that limbs that come down do not hit the house. A pecan tree planted from nut, perhaps buried by a squirrel, will take between ten and fifteen years to start producing. Most trees bought from a nursery will start producing nuts in just five to eight years. If you are interested in raising pecans, you must plant two different varieties with different pollen shed periods.

Pecans are very nutritious and are packed with healthy fats, and protein, as well as vitamin A, vitamin E, calcium, potassium, and zinc. Pecans can be snacked on by themselves or added to dishes and desserts. Two good fall pecan recipes are pecan pie and mashed sweet potatoes with a pecan topping.

Pecans are typically harvested from the end of September through November and is dependent on variety. They are ready for harvest when the inner nut separates from the outer shuck. The hard nut will often be a dark or tan color and will eventually fall to the ground to be collected. Nuts that are starting to separate from the shuck can be knocked down using a large stick or the tree can be shaken using a machine. You must move quickly to gather pecans before squirrels and other wildlife get to them. Any nuts that have holes in the shells should be culled and gotten rid of. The remaining nuts should be dried before storage. Dried pecans can last for several months in a dry spot indoors. However, pecans will last for several years if kept within a freezer.

For those wanting more information on growing pecans, feel free to reach out to Robby Brockman, Extension Horticulture Agent with North Carolina Cooperative Extension, Scotland & Hoke County Centers, by email at Robby_Brockman@ncsu.edu or visit our website.